CIRCLE Cloud Communications is a division of AINEO Corporation. AINEO was founded in 1997 in Tokyo, Japan by engineers from the Japanese IT services provider NEC and the American telecommunications firm AT&T. 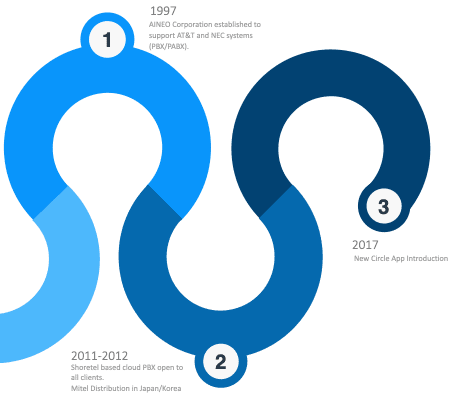 AINEO is an international trading company, with divisions for managed IT service providers, technology infrastructure, and cloud hosting providers of business email and web systems. AINEO is based in Japan, but does work around the globe from our main offices in the high-tech hub of Tokyo.

CIRCLE, (formerly “iPBX Hosting”) was built and is maintained by the technical service team within AINEO called TRIBE Support. The TRIBE Support team has been installing telecommunications equipment in offices, warehouses, datacenters, airline terminals, parks, and dealing rooms across Japan since AINEO began. These systems are the channels for billions of dollars in revenue for our partner clients.

As of December 2013, the group supports more than 6,000 terminals nationwide in Japan. Our team is made up of native Japanese speakers who are fluent in English.

Here are some noteworthy points about AINEO

Our team is fully bilingual. Being fluent in both Japanese and English gives us the advantage of knowing and implementing the latest and best technology for our partner clients.

Here at AINEO, we stand by our platform and utilize our Circle Communications system on a daily basis – the same system that our partners are using.   We provide a customizable and scalable communications solutions for both offices and the hospitality industry, including phones, fax, dealing turrets, call centers, and BYOD/mobility. From the Founder of AINEO

“Large telecoms have huge budgets for spending, but nothing beats the agility and responsiveness of our Bright, Quick and Flexible team to deliver what our partner clients need quickly.” Spencer Wolfe says. “AINEO is a registered carrier with the Japanese government and continues to produce new products and services regularly through Circle Communications, QuickerWeb.com, and TRIBE Support.”

Would you like to become a part of  AINEO’s